Dowry Square is one of the oldest squares in Bristol, laid out in the 1720s, with the houses serving as a mixture of lodgings for the Hotwells Spa and quarters for the emerging medical profession.

A surgeon’s name is still above the door to No. 3 and the Clifton Dispensary was housed at No. 13. Thomas Beddoes founded his Pneumatic Institution with Humphry Davy as one of his students at No. 6, and Johann Schweppe (who developed the first feasible process for manufacturing bottled carbonated mineral water and founded the company Schweppes) lived at No. 4.

They were joined from time to time by eminent English poets including Samuel Taylor Coleridge and Robert Southey and allegedly spent many an evening in the square’s garden around 1800.

The garden is surrounded by its original plinth and many surviving railings and the only entrance is at the north end at the top of the square. It is a private garden cared for by the residents' association and not normally open to the public.

In the days of the Hotwells Spa, it was laid out as a formal parterre to be enjoyed by visitors, but presumably declined in the 19th century. Photos from the 1920s show the garden completely empty. In WWII it was used by a butcher to keep livestock and in the 1950s there were a few small trees and a number of sheds.

It wasn’t until the 1960s and 70s that residents, including several local architects, began to restore the houses and give new life to the garden. The square now contains several mature trees from that period, including a tall Cypress (Cupressus sempervirens) and a magnificent beech (Fagus Sylvatica) surrounding a central area of lawn. The wooded areas teem with bulbs in the spring and there is a blue haze of Myosotis every May.

In recent decades, residents have taken an increasing interest in the garden and its maintenance, adding to the collection of trees and shrubs, and a new plan is under way to give the garden health and life for another generation.

The garden is far from manicured and while it is bordered to give some privacy, the planting is not so dense that a passerby cannot glimpse through to see residents enjoying the area of grass on a sunny day. Its amenity value is hugely valued by Dowry Square residents for whom it provides a green oasis. 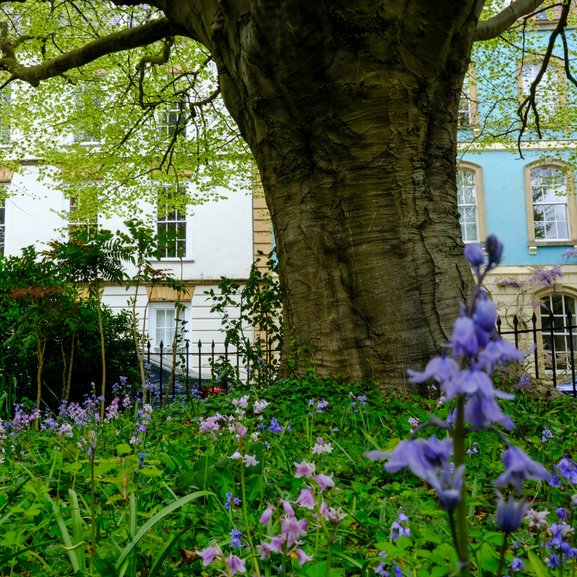