All Saints Church was built between 1868 and 1872. In an 1881 survey conducted by a local newspaper, it was found to be one of the city’s most popular churches, with six services a day from 6am onwards, with as many as 800 people attending evening prayers. The congregation sat on rush-bottomed chairs with men on one side of the church and women on the other.

All Saints was one of 31 churches across Bristol that were totally destroyed by bombing in WWII. In December 1940, it was burned out by an incendiary bomb, despite efforts by boys from nearby Clifton College and local residents to save it.

Arguments raged for nearly twenty years over whether to use the site for a garden of remembrance or to rebuild, but in 1959, the church was designated Grade II listed. It was rebuilt in the 1960s, incorporating the base of the original tower into a design including glass walls and an aluminium-clad timber spire. The largest mobile crane at the time was brought to put the spire into place.

The church was given a series of beautiful stained glass windows made from fibre glass, designed by John Piper. He was an official war artist in WWII: a household name whose work is held by many galleries, such as the Tate, which holds 180 of his pieces. After the war, he began working in stained glass and designed windows for Coventry Cathedral, Eton College Chapel and other churches, as well as for All Saints.

The garden of All Saints is to the rear, reached via the building, and Piper’s windows can be seen on the way to the garden and from the garden itself. 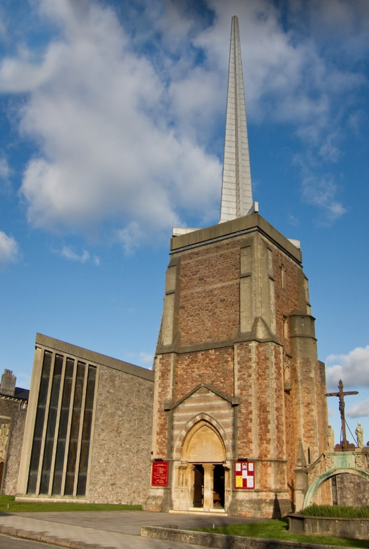