The first stretch of thirteen houses at the east ends of Caledonia Place and West Mall were built in about 1785. The original plan was probably to build a terrace between them to face The Mall and form a square, but this plan was abandoned when the French Revolutionary War escalated in 1793, causing a property crash.

West Mall and Caledonia Place were later extended, in the 1830s, to form the current layout, facing each other across an Upper, Lower and Middle Garden. The latter two gardens had lost their railings, so between 1978 and 1983, residents ran a series of annual Clifton Village Fayres to raise funds to replace the railings.

Roads were closed for the fayres. Residents wore Georgian or Victorian costumes, and ran stalls on West Mall selling food, plants, books and so on. There was a huge merry-go-round on Christchurch Green. A steam organ and classic cars were shown off on The Mall. Some events saw a silver band, an ox-roast, a yard-of-ale-drinking competition, a dance in Goldney Hall garden, and many more entertainments. With crowds of 10,000 at a time, the railings were gradually replaced.

The colonnaded building on The Mall at the east end of the gardens is now home to the Clifton Club but was originally the Clifton Hotel and Assembly Rooms (completed in 1811). Princess Victoria stayed here in 1830 with her mother during a tour round England to introduce the future queen to her people.

Behind the fine houses there are only small areas so the railed and gated spaces were pleasure gardens for the residents to stroll through or sit in and somewhere for children to play. The gardens are now owned by Bristol City Council and the active residents’ group works hard to keep the gardens looking attractive and maintains the 15 planters along the pavements – all have some herbs for neighbours to use.

The west end of the gardens is kept as scrub to encourage wildlife. 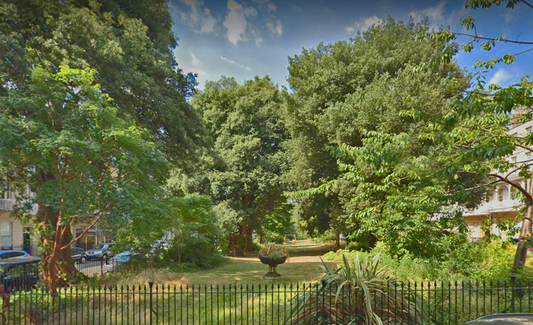