Victoria Square stands on what was originally a field called Ferney’s close. There was a diagonal path across the field, which remains the path today.

The four sides of the square are different from each other and were built in stages. The first was Landsdown Place in 1835 on the north-east side. At No. 13 is a plaque to Dr William Budd, who discovered that cholera was caused by polluted water, not bad air as people had thought.

Next was Royal Promenade to the north-west. It was built in the style of a palace, including the royal coat of arms about the central houses, in the unsuccessful hope of attracting Queen Victoria to stay there if she ever visited Bristol. Numbers 3, 4 and 5 were destroyed by bombing in WWII but flawlessly rebuilt.

The south-west side was built next; famous cricketer W.G. Grace lived at No. 15, which is marked with a Blue Plaque. By the time the fourth side of the square was completed, terraces were out of fashion with the well-to-do, and villas were built instead.

When the square was begun it had a pleasure garden with statuary, some of which remains lying on the grass. In Victorian times, the gardens were railed off and the public were restricted to the diagonal path. This path – not the one through St Andrew’s Churchyard – is Birdcage Walk.

There was a tunnel under the path to allow the residents’ children to play in both gardens without having to encounter the public on the footpath. The tunnel has been filled in but its top can just be seen about 20 yards short of the south-east end of the path, on the south side of the low wall. The railings were removed as part of the war effort in WWII and not replaced.

Some of the trees are from the original 1840s planting. 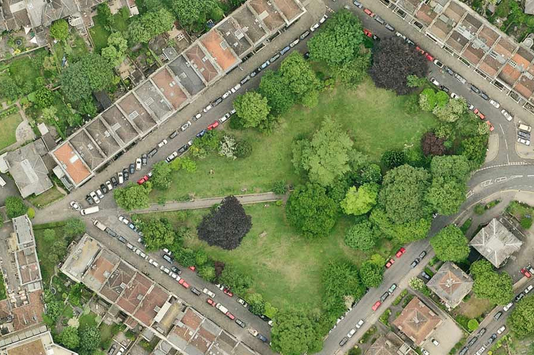