Two churches once stood at the south end of St Andrew’s churchyard. The original parish church, built in 1154, originally stood alone in open green fields, behind the present war memorial. The church became too small in the 19th century for the rapidly growing population. It was demolished and replaced in 1822 by a larger church in the Regency Gothic style.

This newer church was hit by incendiary bombing in 1940, on a Sunday evening. Fortunately the congregation had already made their way to the crypt as the flares and bombs began to fall, and were unhurt, though had to run for their homes when the church caught fire. But the church was destroyed apart from its tower, which was finally knocked down in 1958. The building’s foundations can be seen in the large grassy area beside the path.

The graveyard was only used between 1830 and 1871 and its hundreds of occupants reflect the full range of 19th-century society, from lords and bishops to hospital doctors and army captains to ropemakers and soap-boilers. The nobler occupants are clustered nearer to the church, as befitting their status. 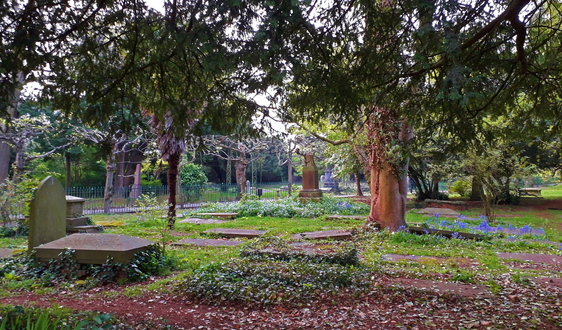